How To Find the Leeward Side of a Boat, Quickly. 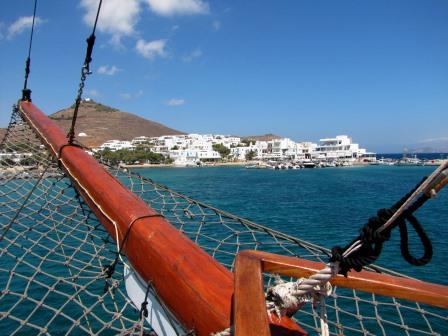 We’ve been leading people on boating and yachting vacations for over two decades, and I think that makes me somewhat of a reluctant expert on the unfortunate subject of mal de mer…better known as motion sickness, which can occur on a boat, car, or airplane. In my opinion the nautical variety is the worst…in fact the word nausea comes from the Greek naus, which means boat. Believe me, I’ve seen it all…green faces, pasty-white skin…trembling, weak bodies stretched out prone on the deck, or worse yet, a row of wetsuit-clad butts lining the rails as their owners loudly discharge their breakfast into the rolling sea.  I’ve seen clients heaving into just about every ocean on the planet…and although I’m not prone to motion sickness, I will admit that in my career of hundreds of boat trips, there were a few times I fed the fish, too.   (Four, to be exact…if you must know: Puerto Rico, Costa Rica, North Carolina, and Galapagos. All good stories, but for another time…)

Not a pretty picture I’m painting, I’ll grant you that, but really, how can you possibly romanticize such a lovely subject?

First off, what exactly is motion sickness?

The simplified version…To maintain your balance, you brain receives and interprets signals from both your eyes and your ears. Yes, your ears actually have a liquid-filled movement and balancing sensor built in. That’s why ear infections can make you dizzy. Normally, when standing on solid ground that’s NOT moving, the messages from your eyes and ears agree, and all is right in your brain. When on a rolling boat, (especially one that’s rolling from side to side, instead of bow to stern), then the myriad of conflicting balance signals your brain is receiving overwhelm it, and it defaults by making you nauseous…very nauseous.

The same thing can happen in a moving car or airplane. The problem is magnified when your eyes are focusing on something close, like a book, because the book is moving with you, but it doesn’t appear to your eyes to be moving. So your eyes report to your brain “Everything stable here, solid as a rock!” But your ears are screaming to your brain that your body is pitching all over the place. Now brain argues with itself for a bit, then in confusion decides to push the “nausea button”. There are various theories as to why your brain petulantly does this to you, but really that doesn’t matter to us, we just want to find out how to avoid the entire mess.

So let’s talk about how to avoid joining the “chum club”. I’ve got several good strategies to help with sea sickness prevention and motion sickness in general. The first step is to know (and avoid) the most common “triggers”, those evil little things that start the whole nauseous process.

Trigger #1: Acidic and Greasy Foods. Eat a light breakfast before getting on the boat, like toast or oatmeal. Avoid foods that are greasy or acidic. Orange juice and coffee are the prime culprits for acid, bacon and eggs win the prize for greasy. If you just can’t pass loading up at the breakfast buffet, we always say “Chew your breakfast well…you may see it again.”

Trigger #2: Extreme Rolling Motion. During your boat ride, position yourself near the center of the boat, preferably on the main deck, outside. Not below deck, and not up on the upper deck where the motion is amplified. The closer you can get to the center of the boat the less motion you’ll experience.

Trigger #3: Close, warm spaces. The optimal spot is outdoors in the shade, but with a nice cooling breeze in your face. Heat and stuffiness are triggers. Do NOT go below decks to use the marine head (bathroom)…that’s a mistake that you’ll relive in nightmares for years to come.

Trigger #5: Close focus. Do NOT try to read, mess with your camera settings, look at your cell phone, or anything else that requires you to focus on something closely while the boat is rolling. This greatly magnifies the conflicting signals your brain is experiencing. Instead, try looking at the horizon. Even though the horizon isn’t moving, your peripheral vision will pick up the boat motion and that will tend to agree with the signals from your ears. This will dampen the conflicting signals instead of magnifying them.

Trigger #6: Thinking about upchucking. The power of suggestion is a potent thing. The more you think about how nauseous you feel, the more you dwell on the idea of vomiting, the more likely you’ll follow through. Instead, think happy non-nauseating thoughts.   No, not thoughts about roller coasters or oyster-eating contests, but calm thoughts that don’t involve anything coming out of your body.

In addition to recognizing (and avoiding) the most common triggers, you can also augment your strategy with some common anti-nausea medications. Keep in mind that different medications affect different people…well…differently. AND, always consult your physician before taking any medication, even over-the-counter varieties. That being said, some of the anti-nausea medications available have proven to be extremely effective at reducing or eliminating motion sickness.

I tend to avoid taking medications if possible, and I love holistic, natural remedies. However, I’ve not seen much success with using ginger and ginger candy to avoid motion sickness. Yes, some people swear by it, bless them. But I’ve also seen plenty of folks losing their ginger-tinted breakfast over the side.

With all due respect to Dramamine, the granddaddy of over-the-counter motion sickness medication, I personally find this to be the least effective. Some people still swear by it, even with its reputation for inducing drowsiness. (Which isn’t such a bad thing on vacation.)

In my experience and observations, I’ve found meclizine to be more effective than dimenhydrinate, and also tends to make you less drowsy.   Dramamine makes a “Less Drowsy” formulation with meclizine as well. You may need to start taking it 24-48 hours before boarding the boat, which requires some forethought.

Sold as a band-aid-like patch and also in pill form, this prescription medication has proven to be very effective in reducing or eliminating motion sickness. It’s common these days to see people on boats with the telltale round patch just behind their ear lobe.

Widely used by the Royal Navy for treating seasickness, this powerful medication is not currently available in the United States, although it often turns up when travelers bring it back from Canada, Mexico, or Europe. You should definitely consult your physician before using this drug to combat motion sickness.

This prescription medication, like many motion sickness medications, was developed to treat extreme nausea from chemotherapy. Happily, it soon became popular with the ocean-going crowd as well. It’s effectiveness on motion sickness is nothing short of astonishing. I know of several adventurous, ocean-loving people who have struggled with extreme motion sickness for most of their lives, and have had limited success with all other available medications. Most of them have found ondansetron to be a “miracle drug” (their words, not mine). In fact, unlike most other motion sickness medications, ondansetron doesn’t need to be taken far in advance of the boat ride, but is very effective AFTER the symptoms of nausea appear, which is unlike anything I have ever heard of. In fact, I witnessed some very nauseous people on a wildly pitching boat take ondansetron orally, and within minutes they were nausea-free! This means that you don’t have to anticipate the problem, but just have to keep some pills handy. Like all medications, you need to consult your physician to get a prescription and to make sure this drug is appropriate for you.

I’ve only had limited experience with my clients using wrist bands, either the pressure-point variety or the wristwatch unit that delivers mild electrical impulses. I’ve had a few people report limited success, but nothing consistent. At this point I’ve simply not had enough experience and success on my trips to recommend either of these.

This is a very medical-sounding name, (which I just made up) for a quirky strategy invented by my very own brother, who suffers mightily from motion sickness. He’s also a scuba instructor, and his propensity for nausea has, over the years, greatly complicated his diving career. This is a man who once got seasick on a rock-solid 65 foot houseboat…tied securely to two other houseboats…on a calm lake. Therefore he is something of an expert in all things anti-nausea, although I would liken him more to a guinea pig, as there is nothing he hasn’t tried. Several years ago he developed a system that, although only for the tough and self-disciplined, worked very well for him and others who tried it. He based it on the known concept that after a few days at sea, people would develop their “sea legs” as it used to be termed, and get accustomed to the motion of the boat. So he started the process a week or so before his trip, in order to get his sea legs before he ever set foot on the boat.

He would go into his basement where he had mounted one of those hanging wicker chairs normally found on a patio or deck. He would then begin to read a book while his youngest daughter would gleefully spin the chair in circles. As soon as he felt the first inklings of nausea (about 2.5 seconds) he would stop. Each night he repeated the process, and was able to last a bit longer before he felt ill. By the time his trip rolled around, his daughter could spin him almost indefinitely without his skin acquiring a green pallor. He was still a bit shaky on board, but able to handle the worst Neptune could throw at him. I’ve had others try this with similar success. So if you want to avoid drugs, and REALLY don’t want to feed the fish, perhaps this is your best shot.

Hopefully you’ll take some of this hard-won wisdom and use it on your next boat vacation for sea sickness prevention to avoid the awful pitfalls of mal de mer.

For all your travel questions feel free to contact me at Jeff@GoGetLost.com